press Enter to search Showing all results: No products found.

When I was approached by the English-based Studio Ashby to pitch on the ceramic bar for the new The Robertson Small Hotel*, I insisted on going to visit the hotel so that I could:

I think its essential to do these things if you are going to create something unique for a specific space. And I’m glad I did. I took a jog up to one of the ‘koppies’ that had Robertson spelled out in white-painted rocks and from up there I could see the whole of Robertson below and the majestic mountains which lie behind it. I was immediately struck by how quiet and quaint the village was. Robertson boasts many wonderful examples of Georgian and Victorian buildings that have mostly been well-maintained. The Robertson Small Hotel itself is a fantastic example of Karoo Victoriana and so I thought that a local interpretation of the English blue and white Spode-style dish would suit the spirit of the Hotel and compliment its existing architectural details nicely.

Traditionally, 19th century blue and white English crockery features idyllic rural scenes within borders of flowers and foliage. The Industrial Revolution was in full-steam and people longed for the placid and picturesque country side. I dare say that not much has changed with our technological revolution and so for the main panel of the bar, I featured the sleepy little town, anchored on a central axis by the town’s main church. From here the grid-iron patterned streets radiate outwards and are lined with trees, motor cars and actual examples of buildings found in the village. Between the actual examples, there are a few invented ones as well as a few inside jokes if you look hard enough. (get down on your knees and look under the bar for a few little surprises). The panel was finished off with a strong graphic border and a chic, contemporary brass trim.

The smaller, side panel features a large urn spilling over with produce from a bountiful summer harvest. The urn includes plants typically found in that region along with animals that live in the valley. A wine label dates the bar and references dear old Em, the previous owner of the building and after whom the bar is named.

When designing the bar, I tried to imagine where it would be in 200 years time. As ceramics basically don’t rot, rust or ruin, they last forever and so its very important to think about an extended life time for anything made in ceramic. Robertson will in all likelihood develop and the village we love today will look very different in the 23rd Century. How charming would it be then to create a ‘whimsical snapshot’ of the village circa 2016 in cobalt glazes so that the older the bar gets, the more special, dated and charming it becomes. 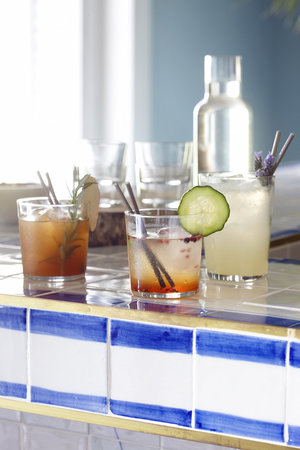 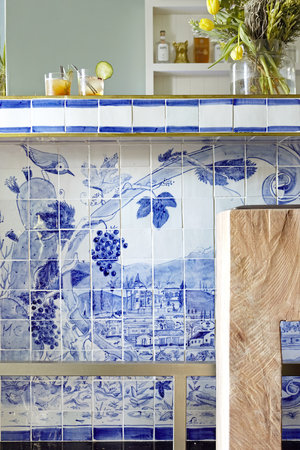