press Enter to search Showing all results: No products found.

Once upon a time, in late 2014, Mr Chandler received an email from fellow local designer Liam Mooney asking him to pitch an idea on decorating a large wall with ceramic tiles. The yet-to-be-built wall would form the backdrop to a bistro on an old family farm located in the dramatic Breede River Valley. The brief indicated that the mural should reference the history of the Cape as well as the surrounding fauna, flora & long-held agricultural activities of the farm.

Other artists were asked to pitch on the idea, one of them being Mr Chandler’s dearest friend, Lucie de Moyencourt. Hand-in-hand Lucie & Mr Chandler set out on a preliminary site visit. They were shown the grand plans for the lawns, gardens & playgrounds – as well as the wall – that would come to be. While walking the grounds, Mr Chandler looked down to discover a few porcelain shards that had been dug up for the foundations. Call it divine intervention; these were the seeds that would grow into the final work that would become ‘The Cape Palampore’.

On the drive home, Lucie & Mr Chandler decided to pitch their bold idea together. Fortune must have been smiling down upon the two friends as they later discovered their pitch was successful.

The design drew inspiration from the Palampores; the intricate textiles made & exported from India in the 18th & 19th centuries. These cotton cloths typically featured a tree sprouting forth from a rocky base, while its branches were laden with fantastical blooms, lyrical foliage & small animals. The ‘Tree of Life’ is a powerful symbol in many cultures, across many centuries, so it seemed a fitting subject for the mural. 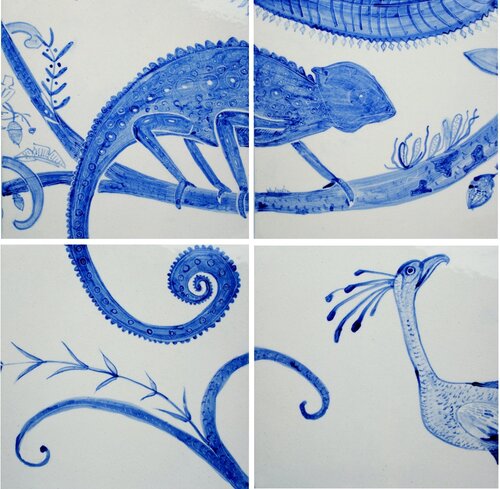 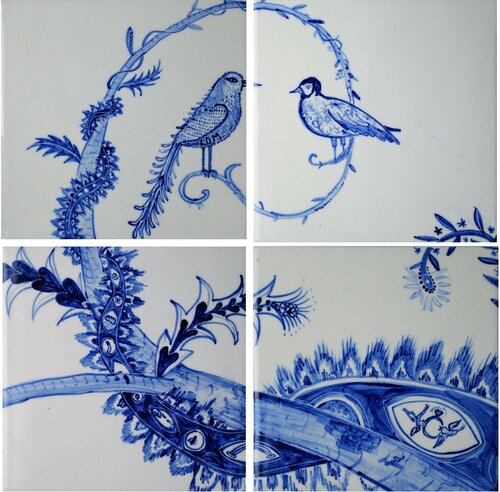 The wall is rife with spectacular symbolism & allegory. The rocky base of the mural’s featured tree mimics the silhouette of the mountains that overlook the farm. The wall boasts over 100 individual specimens of fauna & flora that are indigenous to the area. The ‘spirit of the farm’ is symbolised in the serpentine, feathered element which wraps itself up & around the tree. The body of this element is filled with little cartouches which were each painted by the children of the farm. The featured chameleon is a copy of a watercolour study that Lady Anne Barnard made when she lived in the Cape in the late 18th Century. The gable of the farm features pineapples – a symbol of warm hospitality.